Check out this cool tidbit of information below about a recent scenario from one of our firefighter heroes we serve in North Carolina!

Surry County Ranger, an experienced member of the North Carolina Forest Service, had our BK Radio® that was burned over while completing a burn out on the six-acre Kudzu Creek wildfire in Surry County, NC. The BK Radio® was attached with the belt clip to the outside of the radio harness. There was an additional 800 MHz radio that was in the radio harness. At the time, the radio harness was for a single radio, but two radios were being carried. The 800 MHz radio is used to talk to the local county fire departments and the BK P150 is used to talk to NCFS personnel.

While doing burn out operations, the BK P150 radio unknowingly came loose from the radio harness and fell to the ground! Rangers searched the area and found the missing radio.

Unfortunately, the area had been burned over and the radio case was melted significantly. The BK Radio® was still powered on and working fine. The Ranger used the radio for the rest of the day, without any issues! The display is still readable, and all of the controls still function as it should. Other than the battery being fused to the case and melted, it could still be used. The build quality of the BK KNG series is impressive. This was a particularly hot fire due to the fuel loading and the radio looks like it was downrange of a bomb test.

“I should note that Surry County has had many large wildfires in the past. Due to rural, remote, and rough mountain terrain, fires have the potential to expand into a large project fire quickly. A strong, initial attack, good planning, and strong fire agency relationships have helped this county keep fires under control quickly. Even if this fire had grown larger that day, it was still a comfort to know that this radio was still working fine.

NCFS has since obtained a dual-radio harness.

Thank you very much for replacing this radio. Due to the COVID-19 pandemic, our budget has been cut significantly. Repairing or replacing this radio would have been an expense that we could not have afforded right now. We REALLY appreciate your generous replacement radio and excellent customer relations. BK Technologies® is an awesome company!” – N.C. Forest Service Ranger 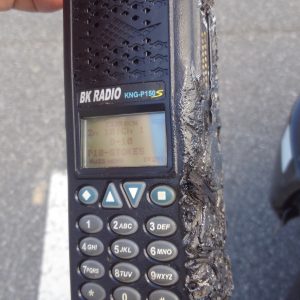 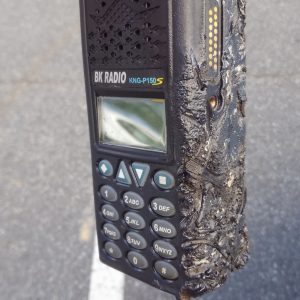